Triglyceride glycemic index as a biomarker for gestational diabetes mellitus: a systemic review and meta-analysis

Triglyceride glycemic (TyG) index is a novel tool for assessing insulin resistance (IR). Recently, TyG index as a potential biomarker for gestational diabetes mellitus (GDM) has been studied, but its performance is yet inconclusive. Thus, we performed this systemic review and meta-analysis to evaluate the performance of TyG index in predicting GDM.

TyG index, especially in the second trimester, could be a promising biomarker for predicting GDM.

Triglyceride glycemic (TyG) index is a novel tool for assessing insulin resistance (IR). Recently, TyG index as a potential biomarker for gestational diabetes mellitus (GDM) has been studied, but its performance is yet inconclusive. Thus, we performed this systemic review and meta-analysis to evaluate the performance of TyG index in predicting GDM.

TyG index, especially in the second trimester, could be a promising biomarker for predicting GDM.

Gestational diabetes mellitus (GDM), the most common medical disorder in pregnancy, is defined as glucose intolerance resulting in hyperglycemia that begins or is first diagnosed during pregnancy (1). GDM is associated with adverse pregnancy outcomes such as cesarean section, birth injury, neonatal adiposity, and large size for gestational age of infants (1, 2). In addition, children born by mothers with GDM are more likely to develop obesity and impaired glucose tolerance (IGT), as well as type 2 diabetes in childhood or in early adulthood (3). Currently, the diagnosis for GDM is based on an oral glucose tolerance test (OGTT) conducted in 24–28 weeks of pregnancy (4), which could be a disadvantage for early prevention of adverse outcomes of GDM: metabolic disorders affecting fetal growth could develop before the diagnosis of gestational diabetes mellitus (GDM) in elderly and obese women (5), and the sensitivity of OGTT is not satisfactory in early pregnancy (6). Thus, a new early screening method for GDM is warranted, especially in high-risk groups.

Available evidence suggests that the main pathogenesis of GDM is related to decreased insulin secretion and increased insulin resistance (IR) during pregnancy (7). Thus, identifying IR status could be beneficial for diagnosing GDM. However, current assessment methods, hyperinsulinemic-euglycemic clamp (HEC) and homeostatic model assessment for insulin resistance (HOMA-IR), are inconvenient to use in clinical settings because of excessive time and resources required. HEC requires fasting, taking blood samples frequently, and i.v. infusion of insulin and glucose, while HOMA-IR requires overnight fasting and plasma insulin measurement several times. At present, though many types of biomarkers have been tested individually or in predictive models for GDM as well, such as adiponectin, sex hormone-binding globulin, and C-reactive protein (8, 9, 10), these parameters are also not available in most clinics. Therefore, identifying feasible biomarkers is warranted for predicting GDM in early pregnancy.

Triglyceride glycemic (TyG, TyG index = (ln (fasting triglycerides (TG) (mg/dL) × fasting glucose (mg/dL)/2))) index as a biomarker for IR, and GDM is gaining increasing attention. Studies have shown that TyG index is highly sensitive in identifying IR, especially for adults and obese adolescents (11, 12, 13, 14, 15). In several previous studies, TyG index out-performed HOMO-IR in the Brazilian population (16) and the Korean population (17) in predicting the risk of diabetes. Measurement of TyG is also cheap and convenient (18), which is more accessible in outpatient settings, and could be a screening tool for large populations.

However, results from existing studies on the performance of TyG index in predicting GDM are inconsistent. Some studies showed a correlation between TyG index and GDM (19, 20, 21, 22), whereas others suggested there was no such correlation (23). These studies are limited in statistical power because of small study samples. Thus, we performed a systemic review and pooled these results using a meta-analytical approach. This study is critical for improving clinical practices regarding early detection and interventions to prevent GDM and related pregnancy complications in a cheap and convenient way, which could be particularly significant for improving maternal prenatal care in low-income areas (24).

The Preferred Reporting Items for Systematic Reviews and Meta-Analyses (PRISMA) (25) reporting guideline was cited to conduct the study. Four databases, PubMed, Web of Science, The Cochrane Library, and Embase, were searched in this study up to March 1, 2020. Keywords used for comprehensive literature search were 'Gestational Diabetes Mellitus', 'Pregnancy-Induced Diabetes', 'Gestational Diabetes', and 'triglyceride-glucose index'. There was no language filter applied. A detailed search strategy is presented in the Supplementary Materials.

Retrieved information consisted of bibliographic information and study-specific details, including study location and year of study conduction, patient characteristics such as age, sex, and BMI. Fasting plasma glucose, fasting triglycerides (TG), and TyG index were also extracted for analysis. Any disagreements were discussed and resolved through consensus.

The Newcastle–Ottawa Scale (NOS) was used for assessing the quality of each study. Briefly, this system evaluates studies based on participant selection (4 points), comparability of study groups (2 points), and assessment of outcome or exposure (3 points) (26). A score > 7 indicates high quality, and a score < 4 indicates low quality.

Continuous variables were expressed as mean (s.d.). Mean difference (MD) was used to evaluate the difference in TyG index between patients with GDM and controls. The random-effect model was used. I2 statistic was used to examine the heterogeneity of included studies, assigning low, moderate, and high heterogeneity to corresponding I2 values of 25, 50, and 75%. Additionally, subgroup analysis was performed regarding the time of pregnancy and study location. The publication bias was assessed by visual inspection of funnel charts and Egger’s test, and sensitivity analysis was carried out to determine the robustness of the results.

Four prospective cohort studies were included in the meta-analysis, involving 1610 participants. Participants in each study ranged from 140 to 954. Two were conducted in Mexico, and the rest were in China and Iran. The average age of the participants ranged from 24.23 to 30.4 years. All studies had clear recruitment exclusion criteria, and two studies reported that eligible participants accounted for 81 (22) and 97% (19) of all enrolled participants, respectively. Sánchez-García and Rodríguez-Gutiérrez (21) collected blood samples during the second trimester (13–27 weeks), Liu et al. (22) and Pazhohan et al. (19) collected blood samples during the first trimester (<12 weeks), and another study by Sánchez-García & Rodríguez-Gutiérrez (23) collected blood samples during both the first and second trimesters. Detailed study characteristics are shown in Table 1. Detailed assessment of the quality of studies is presented in Supplementary Table 1 (see section on supplementary materials given at the end of this article). Study quality ranged from 7 to 8 points out of 9, indicating that the methodological quality of the literature included in this study was high.

Characteristics of included studies and the quality of studies.

The results were robust according to sensitivity analysis (Fig. 3). We used Egger’s test for the detection of publication bias (Fig. 4), and no significant bias was detected in included studies ( P > |t| = 0.128).

TyG index is one of the emerging biomarkers for IR identification and GDM prediction, which is cheap and convenient to practice, and could predict GDM earlier than the OGTT diagnoses (usually 24–28 weeks), which enables physicians to take early actions to prevent GDM and to protect patients from the risk of pregnancy complications. Quantitatively analyzing the possible relationship between outcomes of GDM and TyG index levels using a meta-analytical approach could aid clinical decisions. The strengths of this study are the rigorous methods used for the comprehensive literature search, and strict study inclusion criteria. Source heterogeneity among studies were extensively studied using subgroup analysis and sensitivity analysis.

Our study suggests that high TyG index may be a potential predictor for GDM (MD: 0.22, 95% CI: 0.07 to 0.36, P = 0.003). A recent study by Song et al. (27)has concluded that women with the highest TyG category are at higher risk of subsequent GDM (OR: 2.52, 95% CI: 1.33–4.67; I2 = 65%, P = 0.004), especially in Asia (OR: 3.30, 95% CI: 1.50–7.28, P = 0.003), using data measured before pregnancy and during the first trimester. In our study, continuous data of TyG were preserved in the analyses, using effect sizes based on MDs instead of ORs. Different study focus, search strategy, and inclusion criteria contributed to inconsistency of results between the two studies. Future studies should complement each other and provide a wholesome, theoretical basis for subsequent researchers to continue exploring the predictive value of TyG. However, the heterogeneity is high across studies (I2 = 71%, P = 0.009). To identify sources of heterogeneity, we carried out subgroup analyses according to the time of measurement and study location.

When subgroup analysis was conducted regarding the time of TyG measurement, heterogeneity among studies was significantly reduced. A three-fold increase in TyG index in GDM patients was found compared with healthy controls (MD: 0.26, 95% CI: 0.15 to 0.37, P < 0.001; I2 = 0%, P = 0.54). However, TyG index’s performance in the first trimester remains inconclusive (MD: 0.22, 95% CI: −0.07 to 0.51, P = 0.14; I2 = 84%, P = 0.002). According to a previous cross-sectional study conducted by Wiznitzer et al. (28), the levels of TG in a healthy pregnant woman are fluctuant throughout the pregnancy to meet the needs of the fetus, which decreases during the first 2 months of the pregnancy and gradually increased in the next 7 months. Thus, the comparison of TyG index calculated before or around 2 months could be more sensitive. Secondly, individual difference of participants could contribute to the heterogeneity in TyG levels. For example, racial difference in physiology should be considered. A previous study (29) found the cut-off values of TyG index for identifying IR ranged from 8.45 to 8.65, 8.35 to 8.55, and 8.15 to 8.35 in Mexican American (non-Hispanic white), Korean, and non-Hispanic black adolescents, respectively, which showed that reference values of TyG index could be different in individuals with different racial backgrounds. Furthermore, though all from Mexico, the TyG level of two separate cohorts from the same center showed a significant difference, which could be due to technical differences in implementing tests. In our study, though TyG index predicted GDM overall, it showed non-significant predicative values in either subgroup divided by study location (Latin America and Asia).

Heterogeneity introduced by individual studies was inspected using sensitivity analysis. Significantly higher level of TyG was noted in the cohort reported by Pazhohan (19), and the lowest level of TyG in Mexico was reported by Sánchez-García (21). However, the results were robust according to sensitivity analysis. What would also contribute to the heterogeneity is the management of confounding factors when enrolling patients. Sánchez-García et al. (21, 23) adjusted for age, parity, BMI, systolic blood pressure, gestational age at OGTT, gestational weight gain, and etc. However, in Pazhohan 2019 (19), significant differences existed between GDM group and control group in participant’s age, history of diabetes in the first-degree family, and first trimester-BMI. Similarly, participants in Liu 2020 (22) also owed obvious difference in BMI, physical activity, etc.

Although this study provides promising results, there are limitations, which warrant future research. A major limitation of this study is the small number of existing research, which may introduce small sample bias, and restrict some of the analyses such as meta-regression to control for confounders among studies. Secondly, most of the included studies were cohort studies; thus, a causal relationship between TyG and GDM could not be proved. Additionally, Pazhohan et al. (19) and Liu et al. (22) did not control for confounders adequately, and owing to ethical reasons, individual-level data were not available from these studies, preventing us from doing further adjustments. Lastly, due to the fact that included studies are just from Mexico, Iran, and China, the generalizability of these findings could be limited. To confirm the relationship between TyG index and GDM, and investigate its potential mechanisms, more large-size, randomized controlled trials are needed across different regions. Moreover, future research should carry out TyG index measurement at different time points during the pregnancy to optimize its predicative value of GDM.

In conclusion, considering that it is readily available, cheap, and convenient, TyG index is a promising biomarker for predicting GDM, especially in the second trimester. This could potentially improve the current practice for better population coverage and earlier diagnostic time.

This work was supported by the National Training Program of Innovation and Entrepreneurship for Undergraduates (No. 201910343014).

Egger’s test for the publication bias. 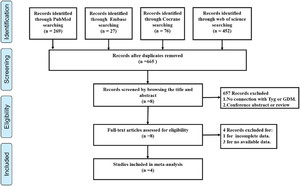 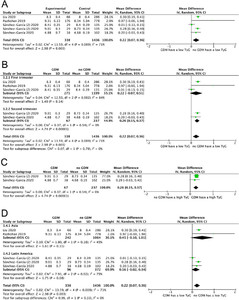 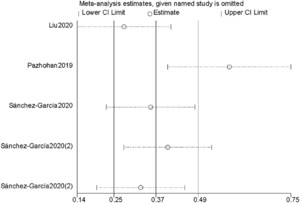 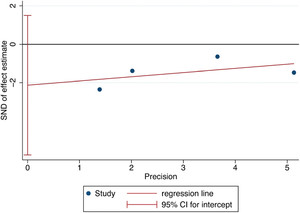