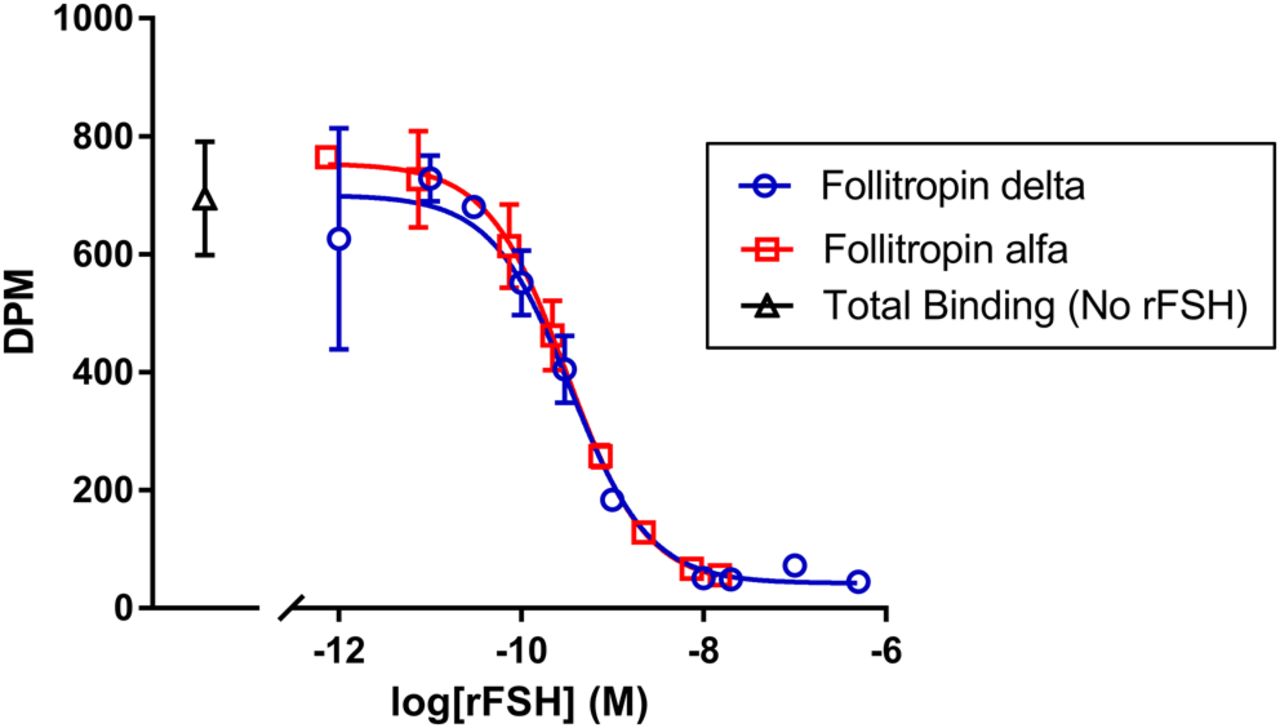 The displacement of radiolabeled propionyl-3H FSH from human FSH receptor was measured as a reduction in dpm bound across the indicated concentrations of follitropin delta (open circles, blue) and follitropin alfa (open squares, red), or total binding in the absence of unlabeled recombinant FSH protein (open triangle, black). Each concentration was tested in duplicate, with the mean and s.d. indicated. Data were fit using four-parameter curve-fitting. The results for one experiment are shown, whereas results from two other tests producing similar results are not shown. 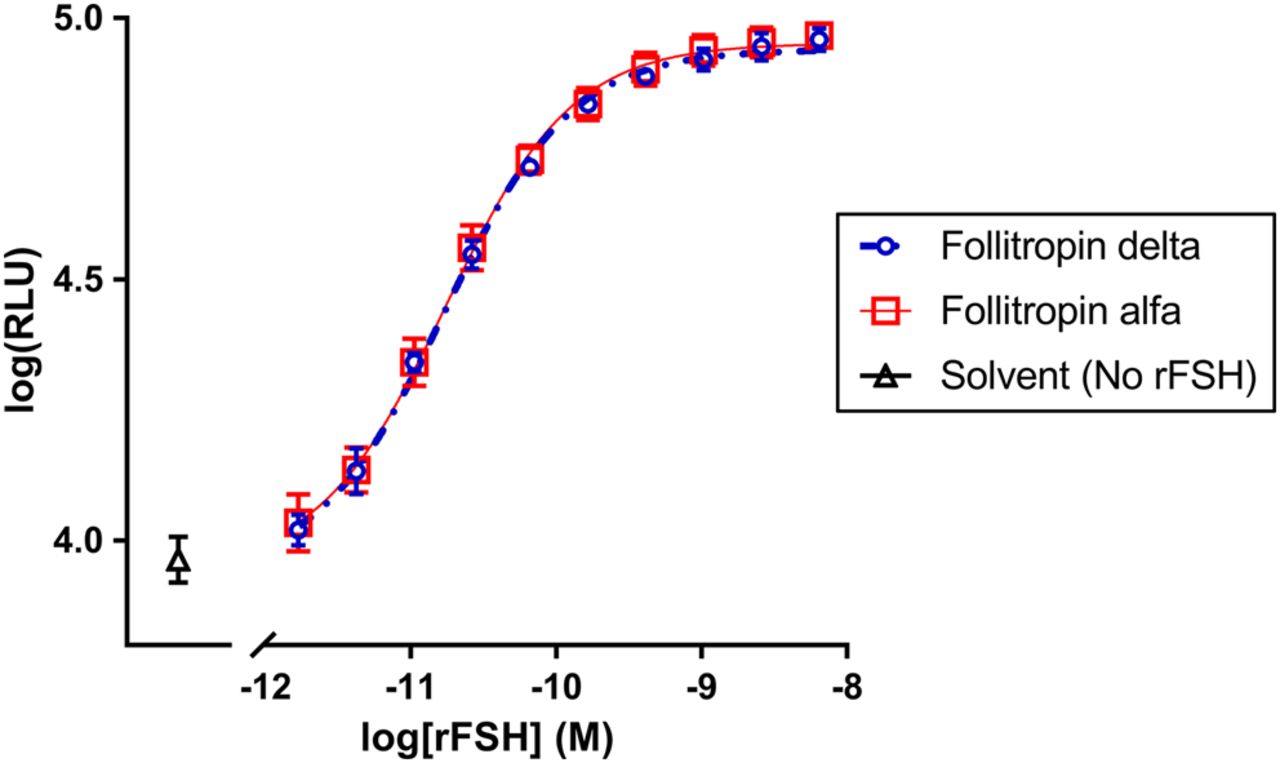 Production of cAMP in response to activation of the human FSH receptor in stably transfected HEK-293 cells was measured across the indicated concentrations of follitropin delta (open circles, blue), follitropin alfa (open squares, red) or no recombinant FSH (open triangles, black) with increasing luminescence (RLU) proportional to increasing cAMP present. Each concentration of rFSH proteins was tested in quadruplicate, with the mean and s.d. shown. 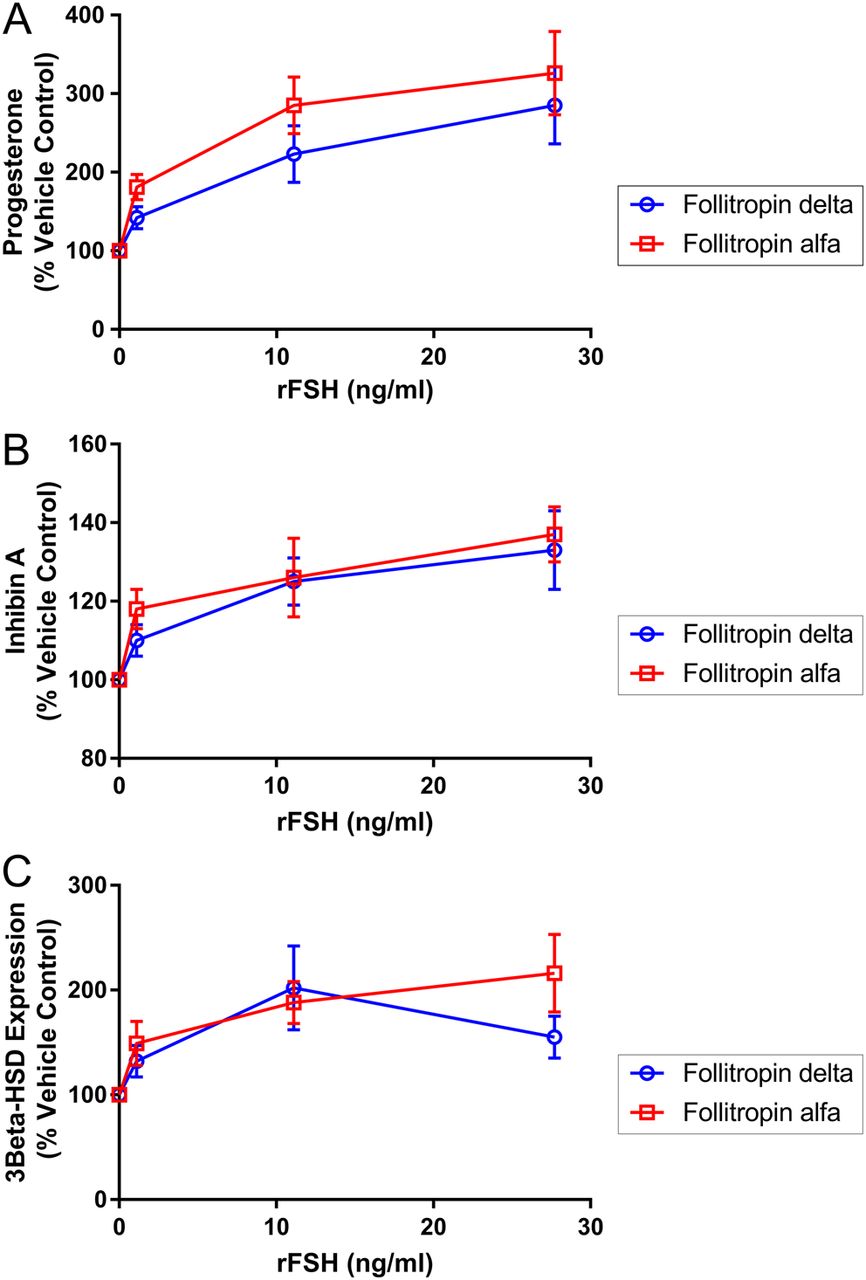 The induction of hormone release and increase in gene expression were measured in human granulosa cells exposed to rFSH proteins in vitro. Cells from eight patients were included, with duplicate samples of cells from each patient tested at each rFSH concentration, normalizing responses relative to the level observed in the absence of rFSH (100%), with data points reflecting the mean and s.e.m. The response for follitropin delta (open circles, blue) and follitropin alfa (open squares, red) is shown in terms of progesterone secretion (A), inhibin A secretion (B) and 3beta-HSD gene expression (C).

The bioactivity of follitropin delta (blue bars) and follitropin alfa (red bars) was compared in vivo in rat in the Steelman–Pohley bioassay, measuring the increase in ovarian weight with the administration of the indicated total dose of rFSH proteins. Bars are the mean of 14 animals in each dose group, and error bars are the s.d.

The clearance of follitropin delta (blue circles) and follitropin alfa (red squares) was compared following intravenous injection in rat, in the presence of a saturating dose of ASF (filled symbols), or the absence of co-injected ASF (open symbols). Serum taken at the indicated time points was analyzed for rFSH concentration. A Student’s t-test compared results in the presence or absence of ASF, with an asterisk (*) indicating a significant difference (P < 0.05).