Sex differences in calcium and phosphate have been observed. We aimed to assess a relation with age.

We used the laboratory values of serum calcium, phosphate and albumin from three different samples ( 2005, 2010 and 2014 years) using the hospital information system of Erasmus MC, Rotterdam. The samples were divided into three age groups: 1–17, 18–44 and ≥45 years. Sex differences in calcium and phosphate were analyzed using ANCOVA, adjusting for age and serum albumin. Furthermore, sex by age interactions were determined and we analyzed differences between age groups stratified by sex.

Sex differences in calcium and phosphate have been observed. We aimed to assess a relation with age.

We used the laboratory values of serum calcium, phosphate and albumin from three different samples ( 2005, 2010 and 2014 years) using the hospital information system of Erasmus MC, Rotterdam. The samples were divided into three age groups: 1–17, 18–44 and ≥45 years. Sex differences in calcium and phosphate were analyzed using ANCOVA, adjusting for age and serum albumin. Furthermore, sex by age interactions were determined and we analyzed differences between age groups stratified by sex.

In this study we aimed to evaluate whether the observed sex differences in men and women ≥45 years of age exist at younger age, and how serum levels differ between different age groups.

We, therefore, compared serum calcium and phosphate levels and calcium × phosphate in three age groups of men and women, using three different samples derived from the Hospital Information System (HIS) of the Erasmus MC, with age ranging from 1–97 years.

The data from the study population were derived from the HIS of Erasmus MC. We sampled three different years 2005, 2010 and 2014. Subjects were included that visited the hospital either in out-patient setting or while being admitted, and in whom serum calcium, phosphate and albumin levels were measured. Per subject only the first serum values measured were included in the analyses. The laboratory values were not coupled to diagnosis, reason for admission or out-patient clinic visit. Only the first serum measurements where serum calcium, serum phosphate and serum albumin were determined at the same time were selected for analyses. The groups were divided into three different age categories: a group aged 1–17 years old, representing youth; a group aged 18–44 years old, representing adolescence and young adulthood; a group above ≥45 years. The latter group is based on our previous study where we addressed sex differences in calcium homeostasis (W N H Koek et al., unpublished observations) which was done in a population-based cohort study where subjects were included that were 45 years or older (7). Furthermore, 45 years is the age when hormonal changes associated with natural menopause first appear (8, 9). The total number of subjects in the different groups are depicted in Table 1 and included 4074 subjects in 2005, 4708 subjects in 2010 and 6433 subjects in 2014. In the 2014 sample, four subjects had assigned dates of birth on January 1,1900 since their real date of birth was unknown; therefore, these subjects were excluded from the analyses. Since the data were anonymized and there was the possibility of including subjects three times when all samples would be merged, we chose to analyze the three samples separately. The medical ethical committee of the Erasmus MC approved the study.

Values are depicted as means with 95% confidence intervals between brackets.

Serum samples from subjects were analyzed at the department of clinical chemistry of Erasmus MC Rotterdam, the Netherlands.

Serum albumin, calcium and inorganic phosphate were measured using the Hitachi 917 Analyzer in 2005, the Modular system in 2010 and Cobas 8000 in 2014 (Roche). Calcium × phosphate (mmol2/L2) was a product of the multiplying the subjects’ serum calcium and phosphate level. Serum calcium corrected for albumin levels was calculated using the formula: calcium (corrected) = calcium measured + 0.02 × (42 - albumin measured) (10).

In order to minimize inferences of change in assay performance on our data sample years 2005, 2010 and 2014 were analyzed separately. Sex differences between serum calcium and phosphate were tested in the three different age categories as well as in decades using analysis of covariance (ANCOVA) within a general linear model with either serum calcium, serum phosphate or calcium × phosphate as dependent variables and sex as a fixed factor. Total serum calcium includes calcium bound to albumin, calcium bound to other proteins and ionized calcium. Moreover, serum albumin levels are lower in critical ill patients and are correlated with disease status. Therefore, data were adjusted for age and serum albumin levels. As a sensitivity analysis, we used the formula as described previously in the assay methods, to correct individual serum calcium for their individual albumin levels. Furthermore, to exclude an impact of very high or low albumin levels on serum calcium levels, we performed sensitivity analyses restricting our data only to those subjects with albumin levels within a narrow range (38–42 g/L).

Potential non-linearity of the associations was tested through the comparison of linear models and natural cubic spline models. We used the STATA package uvrs –univariate regression spline– that selects the spline model for the covariate of interest that provides the best prediction for the outcome (11). When other covariates are added, they are adjusted linearly. By default, the spline regression applies three spline knots (m = 3) which are located in equally spaced centiles of the distribution of the covariate. We ran likelihood ratio tests (LRTs) to compare between models, as linear models (m = 0) are nested within spline models. Additionally, models were compared through Akaike information criteria (AIC) (12): the lower, the better fit.

Also, after restricting our analyses to subjects with albumin levels within the normal range (38–42 g/L), we found similar results (data not shown).

Age differences in serum calcium and phosphate stratified by sex

We found strong statistical evidence of non-linearity in the associations between calcium and phosphate levels and age across sexes and samples with only one exception –calcium levels in men of the 2010 sample. Results from LRTs and AIC are displayed in Table 2. Sex-stratified spline plots are displayed in Supplementary Fig. 1A, B and C (see section on supplementary materials given at the end of this article).

Results of comparison between linear models and spline models.

There are a few older and mostly small-sized studies that have found, although not always consistently, higher serum calcium levels in elderly women compared to men (13, 14, 15, 16). Several studies have consistently shown that postmenopausal women have higher serum phosphate levels than men of similar age (3, 13, 17, 18, 19, 20). Furthermore, several studies showed an age-related decline in serum phosphorus level with sex differences appearing around menopause, where in women serum phosphate increases around 40 years of age before decreasing again after the age of 60 (21, 22).

This study was not set up to investigate the molecular pathways behind this age-dependent sexual dimorphism in serum calcium and phosphate levels.

Relevance of findings and clinical implications

Our data do not only confirm reported age-related sex differences in serum phosphate but also strengthen earlier inconsistent finding of age-related sex differences in serum calcium levels. However, unlike previously mentioned studies, our study contains data from three different sample years of a hospital information system without further selection encompassing a wide age range from 1 to 99 years, therefore being a very close representation of a normal hospital and out-patient population. In this case the lack of selection emphasizes the robustness of the age- and sex-related differences. With sex differences more prominent on the research agenda in the last decade, there is a renewed interest in the relation of sex differences in health and disease. Despite the differences in our study being relatively small, the robustness of the data with similar findings in each of the three different cohorts, clearly points to age- and sex-related differences in physiology concerning calcium and phosphate homeostasis. The relevance and the clinical implications of observed sex differences, although they were relatively small, is that understanding the physiology of sex differences may aid in understanding age-related diseases with a clear sex difference that are associated with calcium and phosphate levels like cardiovascular diseases, metabolic syndrome, osteoporosis and also mortality (3, 13, 17, 18, 21, 31). The fact that women with osteoporosis are reported to have an increased risk for cardiovascular disease exemplifies this (32). Moreover, women with higher coronary artery calcification scores were found to have lower BMD, an association that is not found in men (33). Furthermore, a study using Mendelian randomization showed that a genetic predisposition for higher serum calcium was associated with increased coronary artery disease and myocardial infarction (34). These findings underscore the importance of sex differences of diseases like cardiovascular diseases and osteoporosis. Therefore, establishing sex differences in calcium and phosphate metabolism and understanding the physiological mechanisms that underlie these differences can aid in the further understanding of these diseases. Moreover, this could help with sex-specific strategies in prevention and treatment of common age-related diseases such as osteoporosis and cardiovascular diseases.

The strength of this study is the availability of data in a large number of men and women in the three samples evaluated. Inorganic phosphate and albumin assays have not changed over the years 2005 to 2015. However, for the calcium assay there has been a change in assay in 2013 to the GenII assay. Consequently, calcium levels showed a minimal deviation toward lower serum calcium values. This deviation is not expected to impact sex differences or age-related effects within the 2014 sample, but values obtained within 2014 cannot be compared to sample values obtained in the 2005 and 2010 sample group. Moreover, the measurement systems used to measure inorganic phosphate, albumin and total serum calcium, despite being from Roche, varied in these three sample years, therefore data of the 3 years were analyzed separately and comparing the years should be done with care. Nevertheless, result across these three sample years were very consistent.

The results of this study showed that there is a consistent sex difference in serum calcium and phosphate levels and calcium × phosphate, and that this is age dependent with women ≥45 years of age having significantly higher serum levels of calcium, phosphate and calcium × phosphate compared to men of similar age and compared to women < 45 years of age. There are no sex differences in the age groups < 45 years. Furthermore, women but not men ≥45 years have higher serum calcium and phosphate levels compared to the group < 45 years thus suggesting that a decline in sex steroid levels after menopause is responsible for these sex differences. These findings may be of relevance for increased incidence of CVD in women after menopause.

This work was supported by (NWO)-Research Institute for Diseases in the Elderly (Grant number 948-00-001).

Line graphs of serum calcium and serum phosphate levels in men and women stratified per decade. *Depicts a significant sex difference. Furthermore, below figures is a table with the numbers per sex and per group. 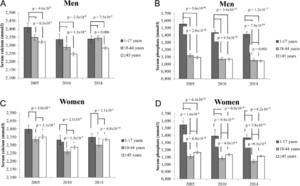