Classic vitamin D signalling pathway. Serum 25(OH)D3 is converted to 1,25(OH)2D3 by mitochondrial 1α-hydroxylase, initiating the signalling cascade by binding to VDR, which dimers with RXR, and binds to specific DNA sequences, VDREs, regulating the transcription of several genes. 1,25(OH)2D3-VDR-RXR complex then synthesizes cathelicidin as an inactive pro-peptide (hCAP18) which is cleaved upon release of the active LL-37 by proteases.

Immunomodulatory actions of 1,25(OH)2D3 in innate and adaptive immunity.

CAMP involvement in type 1 diabetes development in NOD mice. After a triggering event, which induces β cell damage, the release of self-nucleic acids may occur. The presence of neutrophils in the pancreatic tissue, which releases the CAMP, may result in immune complexes which activate dendritic cells via the toll-like receptor (TLR9) and enhancing the production of proinflammatory cytokines such as TNFα which exacerbate the immune response against β cells.

Model summarising the role of cathelicidin in the interplay between the pancreas and the gut. Short-chain fatty acids (SCFA) are produced by the gut microbiome during alimentary fibre fermentation, stimulating the expression of cathelicidin in the epithelial lining of the gut. SCFA stimulates the expression of cathelicidin by pancreatic islets, which reciprocally control and modulate the bacterial growth in the gut, preventing gut microbiome dysbiosis. Cathelicidin expression in the β cell is also induced in the presence of high glucose concentration and may also be induced by vitamin D, as seen in other cell types. Extracellular cathelicidin stimulates insulin granule exocytosis via the epidermal growth factor receptor (EGFR). It is not completely elucidated if intracellular cathelicidin can also induce insulin release directly. Cathelicidin expression also induces the prevalence of regulatory T cells (T-regs) and M2 macrophages which are associated with a lower risk of type 1 diabetes development. 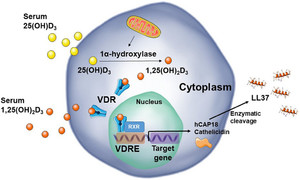 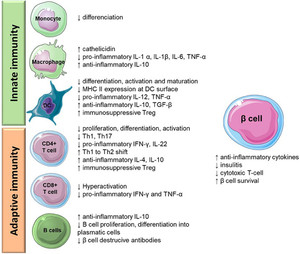 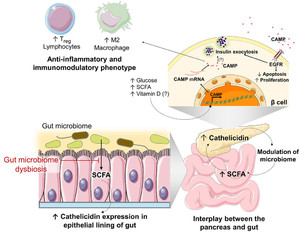